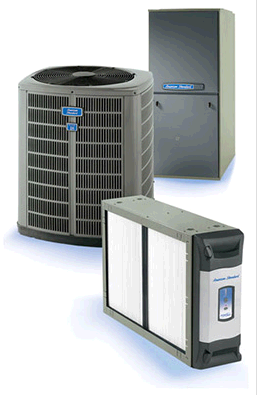 Having years of experience in the industry, New Systems HVAC, the leading HVAC service provider in St. Louis has been providing the highest level of comfort and convenience possible, especially when it comes to the comfort of your homes. Our technicians are NATE certified to properly diagnose and repair all major brands of commercial and residential HVAC equipment.
With New Systems as your go-to for Heating and Air Conditioning needs, you can be assured that your expectations will be met or exceeded. We guarantee that we will protect your home before, during and after installation.  From matching your home with the right sized and cost air conditioner to recommending the perfect air cleaner and humidifier combination, we want you and your family to be as safe and comfortable. We also offer financing to our loyal customers. Visit http://www.newsystemshvac.com/ for more information or call 314-849-7900.

The burning sun soars high in the summer sky, and not a breath of air stirs the humid atmosphere. The children have stopped playing in the afternoon heat. The dog pants miserably. Grandma has left the oven-like indoors to cling to the shade of the porch, fanning herself with a cardboard fan from the local mercantile. Grandpa mops his face with an oversized handkerchief, and everyone tries to endure until Fall. Such was the height of summer before the luxury of modern cooling systems became the norm in most homes.
Years before early twentieth century endeavors by Willis Carrier, whose 'air conditioning apparatus' began to set modern industry standards, an early version of a motorized air conditioner was contrived in the 1850's by Dr. Jon Gorrie, a physician in Florida whose study of tropical diseases led him to believe that a cooler climate could prevent malaria. Even ancient history records attempts at cooling the indoor environment. As early as 400 B.C., the Persians were employing a form of refrigeration through the use of conical-shaped ice houses that stored ice harvested from near-by mountains.
Nowadays, as summer swelters on outside, we can gratefully retreat into the cool comfort of our homes while the A/C hums merrily along, conditioning our indoor atmosphere into a pleasant oasis. Most days we take for granted this wonderful, modern innovation of the past century. We probably enjoy it without giving it much thought, until it breaks down; then we are scurrying to the phone begging our friendly neighborhood HVAC pro's for immediate relief.
The modern home air conditioner works by removing heat and humidity from the air inside your home. The air is moved over an evaporator coil, which is basically a set of chilled pipes. The coil is filled with a cooling agent that transforms from a liquid to a gas as it collects heat. The cooling agent (Freon) moves from the evaporator coil to the condenser coil (the part of your a/c system that sits outside the house) where it releases the heat it has collected. Then the Freon condenses back into a liquid as it cools, sort of the same way shower steam in the bathroom fogs up the mirror; it condenses back into tiny droplets of liquid as it comes into contact with the surface of the cool glass. The compressor pumps the Freon between the evaporator coil and the condenser, keeping it all evaporating and compressing in the proper coil.
Air conditioners are complicated systems that depend on a number of factors in order to work properly; things such as the amount of 'charge' (Freon), air flow, the amount of 'load' they are designed to carry, etc. If any one of these goes out of kilter, you will encounter problems. If additional heat is added to the indoor environment from appliances, changes to the home (added windows, etc), or even more body heat from a large group of people, your air conditioning system might not be able to keep up with the demand.
Another important factor in maintaining the health of your conditioning system, which unfortunately is a pet peeve to many homeowners, is changing the filter. The filter removes tiny debris particles, such as dust, hair, and pollen, from the air to keep your air conditioner (and also the air you are breathing inside the home) clean. The filter continually becomes filled with more and more of this debris, which means it then begins to restrict the air flow through the unit. This, in turn, causes the unit to work harder to move the air through itself and your home.
If the filter is clogged, your system will not be up to optimum performance. If the filter becomes overly full, it will eventually become a source of air pollution to your home. If you remove the filter and do not replace it, the system will eventually become choked with debris, and it will die. And it will be guaranteed to choke and die on the hottest days of the year, when your system is required to work the hardest. Please note: Changing the filter on a regular basis is a necessity for the well-maintained longevity of your air conditioning system.

The warm air that heats our homes during the fall and winter seasons pulls moisture from every square inch of the home, including the living organisms inhabiting the space (that means literally you and your family). The results are dry, itchy skin, annoying static cling, static shocks, and feeling 'too cold' at normal temperatures.
The home itself, even new homes, can suffer damage in the form of cracks in walls and ceilings, as well as separations in wood floors and trim. It can also cause framing around doors and windows to shrink, creating energy-inefficient gaps that allow heat to escape and cold air to come in. The result? Higher energy costs.Even expensive musical instruments can go out of tune. Computers, cameras, and electronic equipment can sustain static electrical charges, causing the necessity of expensive repair or replacement.
A whole-home humidifier from Aprilaire or Honeywell will allow you to protect your family as well as your home and its contents, most likely your largest investment. Providing constant, proper humidity control can help act as an air cleaner as well as moisturizer, keeping everything in your home in good condition, maintaining its value and extending its life.
Today's modern humidifiers are designed to be as environmentally friendly as possible, while making you as comfortable as possible. Whether you are updating your home to make it more health-and-energy efficient or building a new green-certified home, a complete line of contemporary, up-to-the-minute products is available to provide you with maximum protection and comfort. Properly installed humidity control can even help qualify your home for the Green-Built Certification Program of the National Association of Home Builders.
Residential Humidifiers and Air CleanersThe proper levels of relative humidity in your home fluctuate with the changes in outdoor temperature. A whole-home humidifier can continually monitor and accurately respond to the needed level of humidity in your home. The automatic control will keep your home's humidity level exactly where it needs to be to keep you in optimum comfort all year around. (To achieve the same effect with a portable unit, you would need to place one in every room of your home.)
Aprilaire offers a model (the Model 400 Bypass Unit) that uses virtually no electricity to operate, and uses 100% of the water that goes into it, eliminating the need for a drain. Clear, easy-to-use digital control provides accuracy and information to help you keep your home properly humidified regardless of temperature or conditions, 24/7.Ask our team of HVAC professionals how you can contribute to the health and comfort of your household from top to bottom, with a properly installed whole-home humidifier!